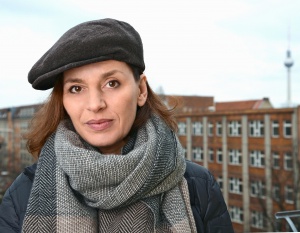 Katia Hermann is a french-german independent art historian, writer, curator and cultural manager. Born 1971 in Paris, she studied cultural management at ESIAG (Ecole Supérieure Internationale d’Art et de Gestion) in Paris (1991-1994) and received her MA in history of modern and contemporary art at Université Paris I Panthéon-Sorbonne in 1997. After several internships at auctioneers and museums (Sotheby’s London, Musée Dapper, Paris and CNAC Centre Pompidou, Paris), she was working on several documentary movie productions, before getting hired by the french pavilion to manage the exhibits at the Expo 2000 in Hanover, Germany. Her next stop was the exhibition “tu parles le français” at Musée d’Art Contemporain Lyon and in Bruxelles where she was in charge of the overall production. 2001 she moved to Berlin. There she worked for film productions as well as for festivals (Rencontres Internationales, Hotel Prishtina), published articles and since 2007,  she curates several exhibitions at the Kulturstiftung Schloss Britz, savvy contemporary, the House of World Cultures, the Freies Museum and alternative art spaces (see menu exhibitions).

Katia Hermann’s main focus are thematic exhibitions of modern and contemporary art. She is particularly interested to reveal narratives in art and in the context of exhibitions as well as in film, and to bring them in correlation and interaction. In addition to commission work, she supports artists with political, and socially relevant, contemporary subjects with projects initiated by herself. Furthermore she continues to work on documentary movie productions, as well as writing and translating for several corporate and individual clients in German, French and English.

Witness of its emergence in the 80ies in Paris, she is observing closely the urban art(s) since many years, doing research (Grant 2017), writing (blogs and catalogues), giving guided tours and developing collective exhibition concepts (URBAN ART WEEK, SORRY!/BERLIN: Writing Graffiti, UAWend), as well as volunteering for working groups and non-profit orgnizations willing to support these arts.