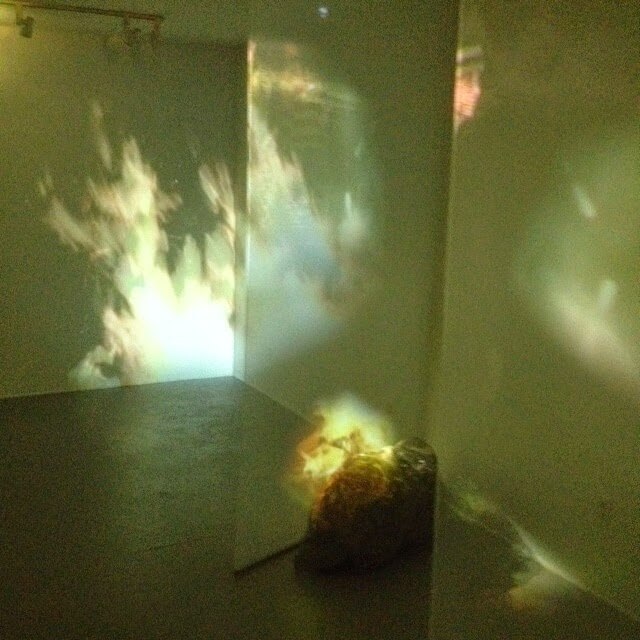 An installation by George Peck and Hugo Perez

CODA:
“Books and all forms of writing are terror to those who wish to suppress the truth.”
Wole Soyinka

In response to the ongoing phenomenon of book-burning around the world, BOOKBURN / LIBRARY OF BOOKS BURNED plunges the spectator into an immersive video installation meant to evoke the visceral sensation of being present for a book burning. An abstract narrative will unfold through the visual experience that will be broken down into three acts: cherishing books, burning books, and preserving the ashes of the burned books for a LIBRARY OF BOOKS BURNED that accompanies BOOKBURN. Both aspects of the piece seek to highlight the burning of books as an ongoing contemporary issue as well as historical one.

George Peck and Hugo Perez met in Budapest in 2005 when Peck had his exhibition of Projected Paintings at the Ernst Museum and Perez was producing a documentary about the Hungarian poet Miklos Radnoti who died in the Holocaust. Over the years, Perez has collaborated with Peck on a number of Peck’s video installations. When they first became aware of the book burnings in Hungary in November 2013, and the fact that the work of the poet Radnoti was being burned along with that of other Jewish Hungarian writers, Peck and Perez were deeply disturbed and unsettled. Peck especially so because of his witnessing of a book burning in Budapest in 1956 in a bookstore on the ground floor of the building he lived in at the time – a traumatic experience that is just as visceral for him today as it was in 1956. Peck coming from a fine art background, and Perez who works primarily in the medium of documentary film, developed the concept of BOOKBURN over a long series of conversations about the best way to respond to the book burnings in Hungary, as well as those that take place in other locations and countries. Peck’s trajectory from painting to video art is based on the idea of deconstructing and reconstructing the traditional 2D rectangular screen method of projecting narrative. The combination of Peck’s visual approach and Perez’ documentary experience has resulted in a unique collaboration that reframes narrative storytelling around social issues into an immersive visual experience. They are both inspired by the concept expressed by Hungarian filmmaker Robert Vas that artists and spectators alike must have “the courage of looking into the face of history.”
In response to the rising tide of book burnings around the world, BOOKBURN / LIBRARY OF BOOKS BURNED places the spectator at the center of a narrative constructed around: the cherishing of books, the burning of books, and the preservation of the ashes of burned books.

Four streams of video simultaneously projected on a series of scrims and walls create an immersive environment through which the spectator walks and becomes a participant. At the center of our installation will be a sculptural “pyre” on which the flames of the burning books will be projected. A fifth video stream will be projected from a podium stand off to the side of the installation serving as a ‘footnote’ to the installation and providing a historical context by examining instances of book burning over the last two millennia. An original score of modern minimalist classical music will accompany the visual narrative.
Our narrative begins with images of libraries, builds up to a book burning, and concludes with an anonymous figure carefully scooping and preserving the ashen remains of the books that we have termed shards. The act of preservation is one of hope that one day the words can someday be extracted from the ashes of the burned books. The shards are jarred, labeled, and shelved into a LIBRARY OF BOOKS BURNED for the installation. (Wherever possible, we will install shelving units on which a LIBRARTY OF BOOKS BURNED, the jarred ashes of the burned books, will be displayed adjacent to the BOOKBURN video installation. In other locations, we will create a series of panels on which images of the LIBRARY OF BOOKS BURNED will have been printed. The panels together with the scrims and a canopy suspended above the installation will create the impression of a pavilion within the larger host space).
BOOKBURN / LIBRARY OF BOOKS BURNED is meant to reflect on the idea that book burning is a form of cultural self-immolation in which those who destroy books are destroying themselves, and those that stand by are complicit in the act of cultural suicide. It has been said that wherever books are burned so too are people killed, but equally true is that where people are killed books will soon be burned. Ethnic cleansing, cultural purity, nationalist hubris go hand in hand with the act of burning books and wiping out culture deemed impure, unclean, sacrilegious. Our hope is that through placing the spectator in the center of our narrative we can raise awareness of not just the phenomenon of book burning but to cause them to consider the passivity and inaction that so often enables these acts of cultural genocide. Our intention is that we will tour the BOOKBURN / LIBRARY OF BOOKS BURNED installation, and that it will continue to evolve and adapt to the circumstances of each location and country that hosts it. In addition, we are currently developing an interactive new media component to the installation that will allow individuals who are unable to visit the BOOKBURN / LIBRARY OF BOOKS BURNED sites in person to engage with the piece.
One interesting note on the production aspect of our installation: We have burned real books to film the burning of books, and this act of burning has created it’s own emotional moment within our creative process. The books that were burned for purposes of filming are library discards that otherwise would be pulped or disposed of in a landfill. The act of burning the books was visceral and unsettling for all those who participated. Confronting the flames of burning books and sifting through their ashes provides a tactile connection to the act that informs the way in which our narrative and our installation are constructed.

INSTALLATION:
The surrounding environment will be part of the work. We will take individual spaces into such consideration where the interior/architecture will be co-opted to be part of the installation. The BOOKBURN component of the installation will incorporate 4-5 video projectors, 2-3 scrim panels or “walls”, and a wire mesh sculpture into the space chosen. A separate section of the space, or an adjacent space will host the LIBRARY OF BOOKS BURNED – freestanding metal library shelves holding the catalogued and jarred ashes of the books burned. The LIBRARY OF BOOKS BURNED makes use of 4” by 8” shelving units, and the size of the library can scale up or down depending on the size of the space and the resources available.

GEORGE PECK – When I examine my own revulsion to book burning, I find it does have a moral component. It is the same horror I feel when people are ignorant of history; it seems a betrayal of the fragile collective enterprise of civilization. Knowledge of history is won with great difficulty, and by moral virtues as well as purely intellectual ones. To throw any of them away dishonors our ancestors and would cheat our descendants. The act of collecting ashes of books and creating a LIBRARY OF BOOKS BURNED is an act of hope and of optimism. This concept not only stands for memory, but also has a dazzling and magnetic visual power beyond the literal and the emotional.

HUGO PEREZ – Books civilized me when I was a bright, feral child – the kind of child that would probably be medicated today. Books were my medicine, words and stories nurtured me and introduced me to a larger world than that in which I lived. Books continue to be a large part of my life, the crutch I lean on when I am seeking something more than who I am and where I am. For me, the act of burning books is an act of suicide, a wiping away of who we are, a return to the brutish time before we first learned to leave our mark in the world. BOOKBURN and LIBRARY OF BOOKS BURNED are works that in a way seem to have been created by some figure in the future who looked back at our time and asked the question: how could they have allowed it to happen?